You have to understand my wife really liked that now forlorn Beetle.

I found nothing locally to replace it. I sent her some links to other cars available for reasonable prices. (To add to the subplots, she left the state for a week just 2 days after the accident, to be with our son and daughter-in-law and our grandkids, at their expense, so they could honor her for her 70th birthday.)

She said a couple of the cars were “OK”, but really were “not me”.

I understood. I had the same opinion.

Then I found, in Washington State, a Red New Beetle diesel TDI that had been repaired and certified fully for 2 years, with only 14,000 miles on it. Being a 2014, it was 11 years newer, and being a diesel it should run and run and run. I was excited. 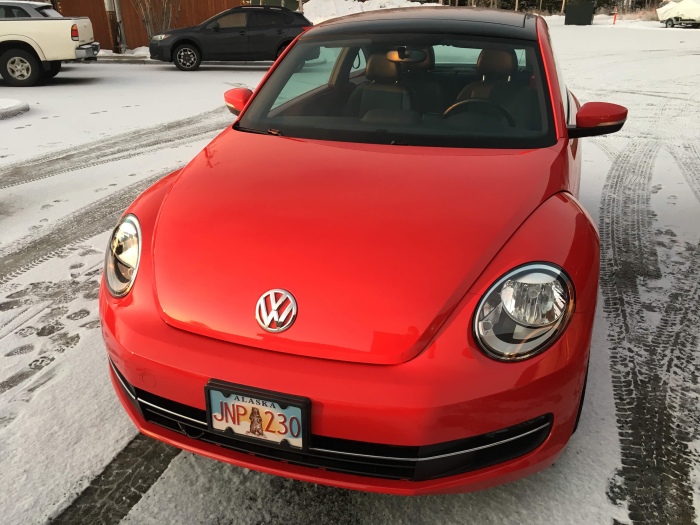 Even though it is no longer possible to buy a Volkswagen with a manual transmission, unless it’s a Special Edition, or Golf R or GTI pocket rocket, I thought this car would be a great replacement! And, since they were aggressively pricing, even with shipping it was comparable to what we’d have to pay here for a similarly aged car (but generally with more miles).

After communication with Annette, I got things started, wiring funds from our “car savings account” (we avoid debt like the Black Plague), and did the paperwork. One glitch that happened in that process was the failure of the dealer to sign off on the title transfer. This is blindingly routine for car sales, yet they missed it.

For $9 I FedExed it back for the proper signatures.

The TDI finally arrived and we took ownership. So far, great. Then we discovered on the 3rd day that there was damage to the lower grille, and to some kind of a casing in front of the engine. We had the local dealer do an assessment. Over $3000 of damage existed. In addition to what we were able to see, the bottom of the radiator was bent as was the intercooler.

They didn’t think drivability was affected in any way, but still.

A body shop provided an estimate for total fix: body damage, underpan damage, and the sublet to the dealer for mechanical repair. With that and many photos, I sent a damage claim to the shipper in Tacoma. Their inspection sheet showed “scratch” in the area of the damage. Indeed, a series of small scratches does exist on the underside of the bumper, typical of curb damage on low-slung cars.

The claim was denied. I had failed to note the damage upon delivery. Would you have thought to lie out full length on the frozen dirty ground at the shipping lot? (If there is a next time, I will.)

I did not, and that was the basis for the denial. The word “scratch” was used to cover, for their purposes, a bullet list of broken things. The damage is obviously from a shipping mishap, as the dealer had the vehicle on the rack and saw no issues before delivering it to the Tacoma shipping yards, and after possession we drove it no more than 20 miles, never contacting or bumping anything.

You have read an account of a two-month saga of probably typical drama in this complex society. And it goes on. Not long after all this the car developed a harsh metallic banging when going over bumps. A tweak on the muffler pipe fixed it.

Side note to that story: the local dealer wanted $850 to cut out the offending muffler assembly and weld in and hang a new one. This for a misaligned muffler pipe banging against a crossmember.

I took it to Meineke. After some fidding with large channel lock pliers, they sent me out the door. The charge: $0. The manager said “I didn’t work hard enough to charge you any money, and I would like you back as a customer.” He deserves Business Owner of the Year, doesn’t he? What used to be standard practice has become worthy of awe.

I’ll take a slightly unkempt dirty shop with honest knowledgable people over a sparkly new spotless dealership who wants my money more than they want a simple and easy fix for the customer.

That was encouraging news in the saga.

So what is my state of mind?

Our lives are not ruined. We continue to worship God, spend time with friends, enjoy blessing upon blessing, and learn a little more how to commit everything to the God Who loves us.

People are so easily derailed by challenges and disappointments that pick away at us like fleas. However, being derailed helps no one and fixes no situation.

The last couple of years has helped my perspective be more realistic and more settled in the love and care of God. That trite phrase says “Don’t Sweat the Small Stuff“. And this, folks, is small stuff compared to a life-altering/threatening diagnosis!

As the Jesus People used to say in the 70’s: “It’s all gonna burn.” Why let our joy be determined by fickle, unpredictable “life happens” events?

In spite of the unreasonable struggle involved this time with replacing a car, God is good! Such complete rest comes with that knowledge.

Even so, will we ship another car? Probably not.

One thought on “When a Things Suddenly Go South, Part II”